Stealing the blinds is an extremely profitable technique for online poker. If you haven’t mastered blind stealing, you are leaving plenty of easy money on the table.

I’ll explain blind stealing here, and offer you some strategies I’ve developed by investigating an database of 2 million poker hands from a range of player types.

You have a blind steal opportunity if: 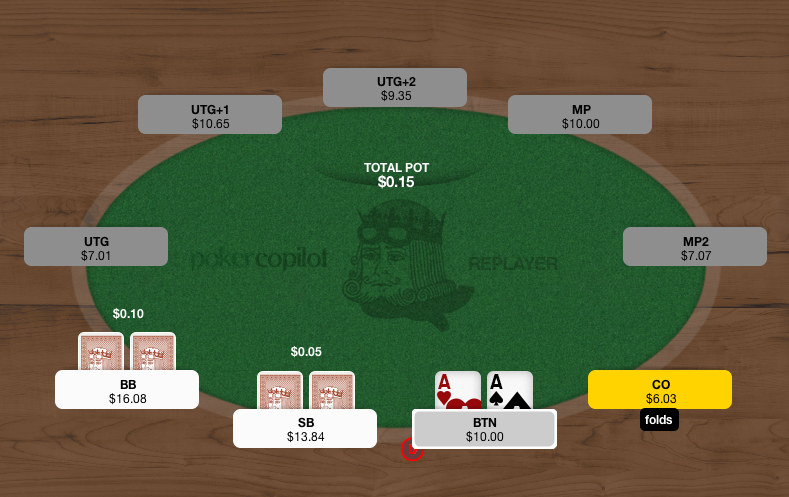 Some people consider that if you are in the cut-off (one position to the right of the dealer button), you also have a blind steal opportunity, but in this article, we’ll stick with the stricter definition.

The small blind can also try to steal the big blind, but in this guide, we’ll just deal with the button’s blind steal opportunities, as this is the most common scenario.

So you are on the button, and all the players before you have folded. You now have three options:

Generally, you should almost always fold or raise in this situation.

I’ve done some calculations over a very large database of hands, and discovered that:

But it gets even better, as I explain in the section below on playing the flop. Keep reading.

What size should my blind steal attempt be?

A typical opening pre-flop raise should be 2.5 to 3 big blinds. More than this would be an “overbet”, that is a bet far too big in comparison to the pot, and your potential gain.

What if the big blind calls pre flop?

Here’s where the beauty of the blind-steal attempt comes in. On the flop, you have the best position and you were the pre-flop aggressor. So you have a big advantage. The villain needs to act first, but is in a bad situation. Typically the villain will check on the flop.

Why? Most times when the big blind calls your blind-stealing raise, he doesn’t have a strong hand. I know this because he folds to a blind steal attempt only about 60% of the time. 40% of the time he called, which implies the player calls with an extremely wide range of possible hands. So more often than not, you should make a continuation bet on the flop. That is, bet again. How much? Between 50% and 100% of the pot. Less than that makes it cheap for the villain to call. More than that and you are risking too much for the size of the pot.

Let’s look at what my big database of tournament hands tells us about making a continuation bet after a blind steal attempt:

53% of the time when the big blind defended against a blind steal attempt AND faced a continuation bet, they folded.

In ring games, the big blind who tried to defend folded to 44% of continuation bets.

Let me put pre-flop and flop percentages together: in tournaments, the big blind folds to 53% of blind steal attempts. When he defends, he folds a further 53% of time when facing continuation bets. In the second case you’ve won the blinds and the big blind’s attempt to defend against the steal. Less than 25% of the time, you’ll need to play against a villain who is brave enough to make it past your continuation bet.

A blind steal attempt followed by a continuation bet is an extremely rewarding technique in the long run.

What if the big blind villain reraises preflop?

You now have tough decisions to make. Here I can only give vague tips. You’ll need to appraise what you know about your opponent, and take into account the strength of your own hand. I’d tend towards folding non-premium hands, and calling with premium hands. Unless I had observed that this particular villain liked to reraise blind steal attempts. In short, you have the type of decision-making situation that makes poker so enjoyable and difficult.

If you try to steal the blinds with terrible cards, you could end up at showdown. You’ll reveal to the table that you tried stealing without the cards to back it. Do this a couple of times and the table will stop respecting your blind steal attempts. Even if that is the case though, not all is bad. You’re still at a pure mathematical advantage. Such is the beauty of the blind steal attempt.

Remember the old poker mantra: “play the player, not the cards”.

Other players will fold almost anything to a raise. So if they call, give their hand respect on the flop. Chances are, you’ll have the worse hand on the flop. But you can also increase your stealing range against these players.

Use these two stats well, and you’ll be able to adjust your blind stealing strategy against each player.

When you are on the button and everyone so far has folded, consider the blinds to be your personal property, and play strongly to grab them as often as you dare.